For TV writing work, my writing partner Ciaran and I are represented by Rebecca Watson at Valerie Hoskins Associates.  You can find their contact details on their website here, and watch a special film we made for them here...

The list of shows was getting a bit long so I've trimmed it down to the most recent  ones plus the 'greatest hits', but if you're curious, you can download our full writing CV at the link below. Actually, even that's had to be trimmed a bit for length these days...

The Amazing World of Gumball 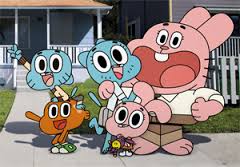 It's one of the craziest and best cartoons in the world, and we were on the writing team for Series 4 through 6, writing on over 25 episodes. 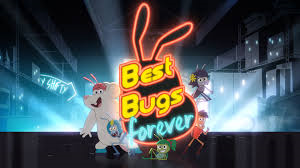 Welcome to Shifty Sands - to humans, a rundown motel in the Nevada desert, but to the hundreds of bugs who call it home, it's the best city in the world!  Ciaran and I wrote about half of the series and oversaw the writing team for the rest, and we're really proud of the living world we created. 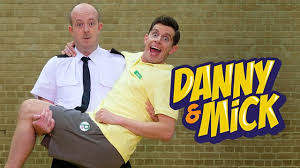 Until now, the four episodes of this show were the craziest things we'd ever written for Dick and Dom...

...but now there's Diddy TV, a crazy funhouse reflection of the entire world of dumb telly shows out there!

We wrote about half of the sketches, songs and links across the four series, which thanks to its guest stars means we can now add Reece Shearsmith to the list of famous people we've written for!  Oh, and Stampy Longnose.  Trust me, that's a big deal.

Ciaran and I wrote half of this show and script-edited the other half, over three series plus a special.  Blue-Zoo have done a beautiful job of bringing the characters to life, this really is a very sweet show that's loved around the world! 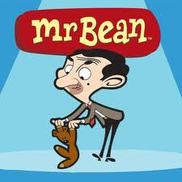 After a ten year gap, Tiger Aspect made a brand new series of the international smash hit Mr Bean: The Animated Series, and we wrote a whopping 19 episodes, over a third of it!  Fortunately it took less than 10 years to commission series 3, which we wrote another 14 episodes of and head wrote the remainder. It's in heavy rotation on CITV, which means you can get yourself a quick fix at any time on the CITV player!

Honestly this show has some of the BEST animation I've ever seen in a kids' cartoon, simply gorgeous, coupled with a beautiful attention to comic detail  from the amazing Blue-Zoo studio. Series 2 is on its way - due to other writing commitments I've 'only' been able to write two episodes for it!

Observe the two cats on the left.  If you look very, very closely you may just detect the cunning costume and spot that one of these cats is in fact an alien in a foolproof disguise.  The other cat is simply a fool.  It's a fun show - and we won the British Animation Award for best writing for our episode 'Sardonians of the Galaxy'!

Our big break into TV came when we were talent-spotted at the Edinburgh Fringe for the first series of this prison-based variety show.  Series producer and diamond geezer Steve 'Two BAFTAs' Ryde liked us so much he had us back on in a variety of silly wigs as different acts on every series, and more importantly invited us to write episodes for every series since, including the revamped 'The Slammer Returns', notching up a fifth and the current sixth series for which we managed to write more than half of the episodes!  Thanks a million, Steve!

The Sesame Street - CBeebies coproduction starring Cookie Monster and Elmo that generated so much interest, it even made it onto Newsnight, we were involved in this one from the start, taking part in the early development, writing a pilot episode, and now writing five eps across the first series, or first two series, they keep changing the rules for how you count these things!  But who cares about that, the point is I got to meet the REAL Cookie Monster!   Me so happy!

Another first for us, our first computer game!  In this case we helped develop the characters and world for this new property for Darrall MacQueen, tasked with bridging the gap between CBeebies and CBBC in an unprecedented co-commission.  The hope is that the platform game will provide a, well, a platform, towards creating a full animated series, again bridging the age gap.  Let's go nuts!  You can play the easier CBeebies levels here; or the more difficult, CBBC levels here.  Can you beat a game designed for six year olds..?

How cool is this?  We got to write a load (and I mean a load) of episodes for series 4 of 'Dennis The Menace & Gnasher', starring two of my childhood icons!  I have the best job in the world. And we wrote a further 6 episodes for the recent CGI reboot, 'Dennis & Gnasher: Unleashed!'

You can generally find at least one of our eps, and also see exclusive mini-episodes, here on the CBBC website.

I'm hoping you've seen this show, because it's rather hard to explain if you haven't... Basically animated adventures in a tiny treetop world, but with added yoga.  We were lucky enough to write an episode of this internationally popular CBeebies show - which means I got to write dialogue for David Tennant himself.  Not as the Doctor, sadly, but I'll take what I can where I can!  And as an added Whovian bonus, Sophie Aldred voiced the title character!

The Legend of Dick and Dom

We wrote episodes for all three series of this supremely silly sword-and-sorcery spoof, sending Princes Dick and Dom on adventures including a lovesick swamp monster, the biggest turnip in the world, and a man with the head of a badger that nearly blew the whole series budget.  Lots of fun!

Yes, THE Globe Theatre.  To celebrate the 450th birthday of the Bard, The Globe have put together an amazing interactive exploration of what goes into a great play.  The live action script is by myself and Ciaran (and some hack called Bill), the animations and bonus features are other people's works of genius!

Watch and explore it here!