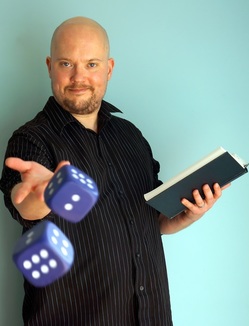 Andrew Barnett Jones has made up stories for loads of top TV shows including Boy Girl Dog Cat Mouse Cheese, Mr Bean: the Animated Series, The Amazing World of Gumball, Lloyd of the Flies, Dennis & Gnasher Unleashed, Best & Bester and many many more.

Today he’s going to make up a story for you – but he has no idea what it is.  Instead, with your help, he’ll be playing The Story Game, creating a brand new, hysterically funny, wildly creative story from a handful of words, a roll of the dice and his own roller coaster imagination.

If you’ve ever wondered where writers get their ideas from, now’s your chance to find out – and by the end of the show, you’ll be inspired to use his simple, practical methods to play the Game yourself and make up your own hilarious stories!

Star of CBBC’s The Slammer in a wide array of silly wigs, winner of the Children’s Choice Award for Funniest Voice and previous winner of the Crick Crack Club’s Grand Liar’s Trophy making him officially one of the biggest liars in the country (honest!), Andrew is known to many thousands of theatre-goers all across Great Britain for his previous improvised storytelling shows Professor Bumm’s Story Machine and Fairly Tales.

Here's what some people have said about Andrew's previous storytelling shows:

“The children dissolved into giggles, the parents shone and I laughed for the first time in three days.” – The Times

“He works so hard and plays the audience so skilfully that you soon find yourself grinning as broadly as the kids.” – The Guardian

“As he proceeds to make this most difficult of genres look easy, seemingly plucking funny and inventive yarns out of thin air, his evident fun in doing so is infectious.” – The Stage

“Brilliantly bonkers – I wish my parents had taken me to see more shows like this!” – Three Weeks

“I was crying so hard with laughter I was unable to prevent my daughter falling out of her seat with laughter.” – 35 year old inattentive mother

22nd October 2022 - The Lyric, Hammersmith - almost exactly 20 years on from my first ever professional children's theatre performance of 'FairLy Tales' in the same venue! ('The Musical Milkshake' & 'The Gallant Goldfish')