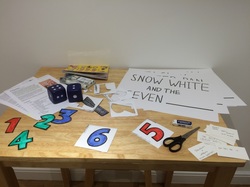 A splendidly silly and seasonal version of The Story Game in which Andrew fights against the odds to stage a brand new one-man pantomime!

OH YES HE DOES!

There's only one tiny problem - he has no idea what it is yet.  No title, no plot, not a single clue.

OH NO HE DOESN’T!

Instead, he’ll be playing The Panto Game, creating a fantastically funny festive fable from a handful of words, a roll of the dice and his own roller coaster imagination.  Oh, and he needs YOUR help...

OH YES HE DOES!

Expect heroic heroes, villainous villains, silly songs and a man in a dress, as Andrew goes completely Christmas crackers.   He’s never told a story like this before.  But he knows it’ll all end happily ever after.

Here's what some people have said about Andrew's previous storytelling shows:

“The children dissolved into giggles, the parents shone and I laughed for the first time in three days.” – The Times

“He works so hard and plays the audience so skilfully that you soon find yourself grinning as broadly as the kids.” – The Guardian

“As he proceeds to make this most difficult of genres look easy, seemingly plucking funny and inventive yarns out of thin air, his evident fun in doing so is infectious.” – The Stage

“Brilliantly bonkers – I wish my parents had taken me to see more shows like this!” – Three Weeks

“I was crying so hard with laughter I was unable to prevent my daughter falling out of her seat with laughter.” – 35 year old inattentive mother